WASHINGTON – Howard University Hospital, the nation’s only teaching hospital on the campus of a historically Black university, is about to undergo a historic transformation, Howard University President Wayne A. I. Frederick said today in his Spring 2022 State of the University Address.

Howard University is advancing plans to build a new hospital, partly through the support of a $100 million federal government budget appropriation this year. The new hospital is also slated to benefit from a $225 million, 20-year tax abatement on commercial development sites owned by Howard, $25 million in infrastructure investment and $26.6 million in programmatic support over six years from the District of Columbia.

The 600,000-square-foot project – part of the University’s District of Columbia-approved 2020 Central Campus Master Plan (CCMP) – would establish a 225-bed teaching hospital with a Level 1 Trauma Center on the University’s campus, pursuant to the further processing of entitlements and regulatory approvals. Howard University Hospital is a major employer in the region and has historically served as a training center for half of the nation’s Black doctors.

“Less than a decade ago, when I became president of Howard University, the hospital was in a dire financial situation. Since that time, not only has my administration dramatically improved the hospital’s financial posture, but we have positioned it to become a state-of-the-art health care provider and educational institution,” Dr. Frederick said. 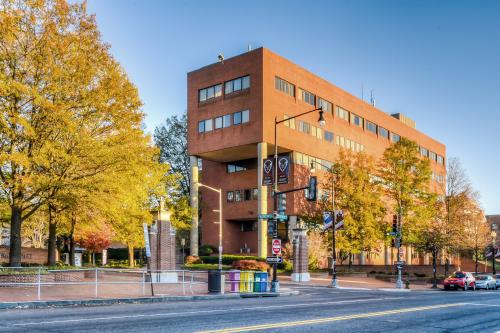 Howard University is entering into an unprecedented period of growth. In addition to funding for the hospital, Dr. Frederick has announced $785 million in campus construction initiatives  at the University, which includes three new multidisciplinary academic facilities and other major renovations.

The HUH revitalization plan will also include an all-new Medical Office Building, which will house a new Howard University Cancer Center facility. As reflected in the 2020 CCMP, the new hospital will be located where the College of Nursing and Allied Health Sciences (Annex I/II) was previously housed, between Bryant Street and W Street NW. The Medical Office Building will be developed on University property proximate to the new HUH.

In fiscal year 2014, HUH reported a $60.4 million loss, and there were widespread fears that the hospital might close. Dr. Frederick’s administration led a major turnaround effort, which involved several moves to improve management and the financial condition of the institution. Since early 2020, HUH has been run by Adventist Healthcare through a management services agreement.

“Howard University Hospital has an unrivaled history of serving the under-resourced communities in our nation’s capital. But to ensure this treasured institution could survive required a new vision for how the hospital would operate. This critical revitalization effort will honor the legacy and mission of the hospital while empowering it to once again become a leading health care institution dedicated to eradicating health inequities and serving the most vulnerable individuals,” said Dr. Frederick.

The rich tradition of leadership and service at Howard University Hospital dates back to 1862 and the founding of its predecessor, Freedmen's Hospital, which catered to the needs of thousands of African Americans who fled to Washington during the Civil War, seeking their freedom. Freedmen’s was housed in converted army barracks and was the first hospital of its kind – one with a mission devoted to providing medical treatment for former slaves. In 1863, it was placed under the charge of Dr. Alexander Augusta, the first African American to head a hospital.

In the late 1860s, after the Civil War, Freedmen’s formed a partnership with the Howard University College of Medicine to train African American medical professionals. In 1975, the historic Freedmen’s Hospital closed after 112 years as Howard University College of Medicine’s primary teaching hospital. The existing building, facing Georgia Avenue NW, opened that same year.

HUH offers medical students and other academic health care learners a superior learning environment and opportunities to observe or participate in groundbreaking clinical and research work with professionals who are changing the face of health care. Health teams are engaged weekly in activities and services in the local community, providing medical presentations, free health screenings and educational workshops.