The financing package for Howard University’s $785 million capital investment plan – which will result in three new multiuse campus facilities and modernization of others – requires about $140 million in philanthropy and fundraising to bring it to fruition.

The plan, announced March 23, calls for construction of a new STEM complex, a new Health Sciences Complex, and a Center for Arts and Communications, all slated for a 2026 completion date. These are the first new facilities erected on campus since 1984. Also, the Myrtilla Miner Building, home of the School of Education, will undergo extensive renovation.

The financing package includes four sources of funds, including fundraising, which will account for $140 million-$143 million, a goal University leaders have said they see as achievable as 2022 has seen an increase in donations from alumni and philanthropic largesse.

“We feel very confident that our alumni, our friends, and our corporate and foundation partners will understand the importance of this work and want to invest alongside us,” said David Bennett, Howard’s senior vice president of development and alumni relations.

Another part is $200 million Howard intends to obtain from the federal government’s HBCU Capital Financing Program, a $1.1 billion pool of money HBCUs can borrow from for infrastructure needs. Howard, which receives an annual federal appropriation, is currently ineligible to access that funding, but a pending bill will allow it.

Rounding out the package is $145 million from proceeds from Howard’s leased properties.

Charlie Lewis, president of Howard University Alumni Association, says he is pleased to see these moves. “I think that it is long overdue and I’m glad to see Howard modernize its buildings to keep pace with other universities and colleges,” he said, citing recent projects such as Frederick Douglass Memorial Hall’s 2021 renovation and the Undergraduate Library, which underwent a complete overhaul before reopening in 2021.

The plan calls for a similar top-to-bottom modernization of the historic Miner Building, which will house both the School of Education and the Howard University Middle School for Mathematics and Science.

The mainstay of the plan is creation of the Center for the Arts and Communications, which will expand and add wings to Childers Hall that face McMillian Reservoir, incorporating theater and rehearsal spaces, dance studios, and television and radio production facilities. The center will be home to the Cathy Hughes School of Communications, the Chadwick A. Boseman College of Fine Arts, WHUR-FM and WHUT-TV.

Likewise, the seven-story Health Science Complex will bring together the colleges of medicine, pharmacy, nursing and allied health sciences, dentistry, and the University’s mental health programs. And the STEM Center will bring together related specialties, such as engineering, mathematics, physics, chemistry, biology and related laboratories.

Bennett said the package reflects Howard’s commitment to the next generation of students to begin the renewal of its academic core. “It’s a complex project with a lot of moving parts, but we are confident our community will join in this important endeavor,” he said. 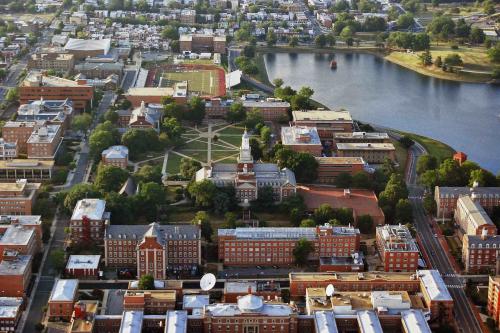