WASHINGTON – Morgan Stanley and Howard University today announced the first cohort of students from Howard selected to participate in Morgan Stanley’s inaugural HBCU Scholars Program, an integrated program to support students at three Historically Black Colleges and Universities (HBCUs). Five outstanding first-year students have been selected to receive the four-year scholarships to Howard, which will cover tuition, room and board in order to fully remove financial barriers to higher education.

The goal of the HBCU Scholars Program is to set students up on a path to educational attainment and financial independence by lifting the barrier of higher education costs. In addition, Morgan Stanley is introducing programming aimed at preparing scholars for their post-graduate careers as well as related programming offered to the broader student body and faculty, including virtual and on-site components to complement the on-campus curriculum. The HBCU Scholars Program will also feature Morgan Stanley mentors and sponsors to support the scholars along their journey. 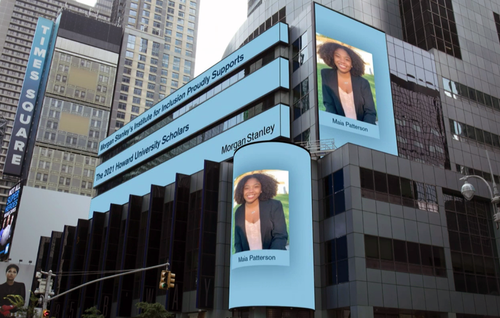 “Supporting diversity in the communities where we work and live is a core value at Morgan Stanley. Through lifting the barrier of higher education costs, this program will help improve the economic opportunities for these HBCU students,” said Susan Reid, global head of Diversity and Inclusion at Morgan Stanley and director of the Institute for Inclusion. “We are pleased to congratulate the five highly accomplished scholars we are welcoming to Howard, and we look forward to working with them on their educational and career journeys.”

“A crucial component of Howard’s mission is to support individuals who have the talent and ability to excel but have been held back by a lack of access and opportunity. We are extremely appreciative of Morgan Stanley for helping us provide those opportunities to deserving students,” said Wayne A. I. Frederick, president of Howard University. “All students deserve the chance to test the full reach of their potential without having to scale back their dreams because of financial realities. This scholarship program will help Howard students pursue and attain personal and professional success and empower them to be of greatest service to their communities.”

The initiative was developed by Morgan Stanley’s newly established Institute for Inclusion and is a part of the Firm’s larger mission to create an integrated, holistic and transparent diversity and inclusion strategy, both internally and externally.

The program will begin in the fall 2021 semester. The 2025 class of Spelman College and Morehouse College scholars were announced in April.