WASHINGTON – Howard University is proud to announce the Showtime Marching Band will escort Vice President Kamala Harris at the 59th presidential inauguration on Jan. 20. They will perform a special drum cadence for the parade.

“It is our esteemed honor to be involved in the historic inauguration of President-elect Joe Biden and Vice President-elect Kamala Harris,” said Howard University President Wayne A. I. Frederick. “Throughout her career, the vice president-elect has carried her Howard education with her, ensuring that she adhere to truth and service and inspiring her to achieve unprecedented levels of excellence. It is perfectly fitting that the Showtime Marching Band, the ensemble that captures and reverberates the heartbeat of our institution, should accompany her on this last leg of her journey to the White House. It was that steady pulse of her Alma Mater’s legacy that propelled her forward, and it is that same rhythm that will carry her onward as she undoubtedly will become one of the most influential vice presidents in the history of our nation.”

Showtime Band will have the drumline, the Flashy Flag Squad, and Ooh La La dancers in the inauguration parade, representing less than one-third of the band for safety precautions.

“We are proud to unite safely as a band to represent Howard University, Vice President-elect Kamala Harris and all HBCUs across the country,” said Kelvin Washington, the Howard University band director, who has been working on the perfect song for the parade since Harris was selected to join President-elect Joe Biden on the presidential ticket in August 2020. “It's a very gracious opportunity for us, and we’re very thankful for it.” 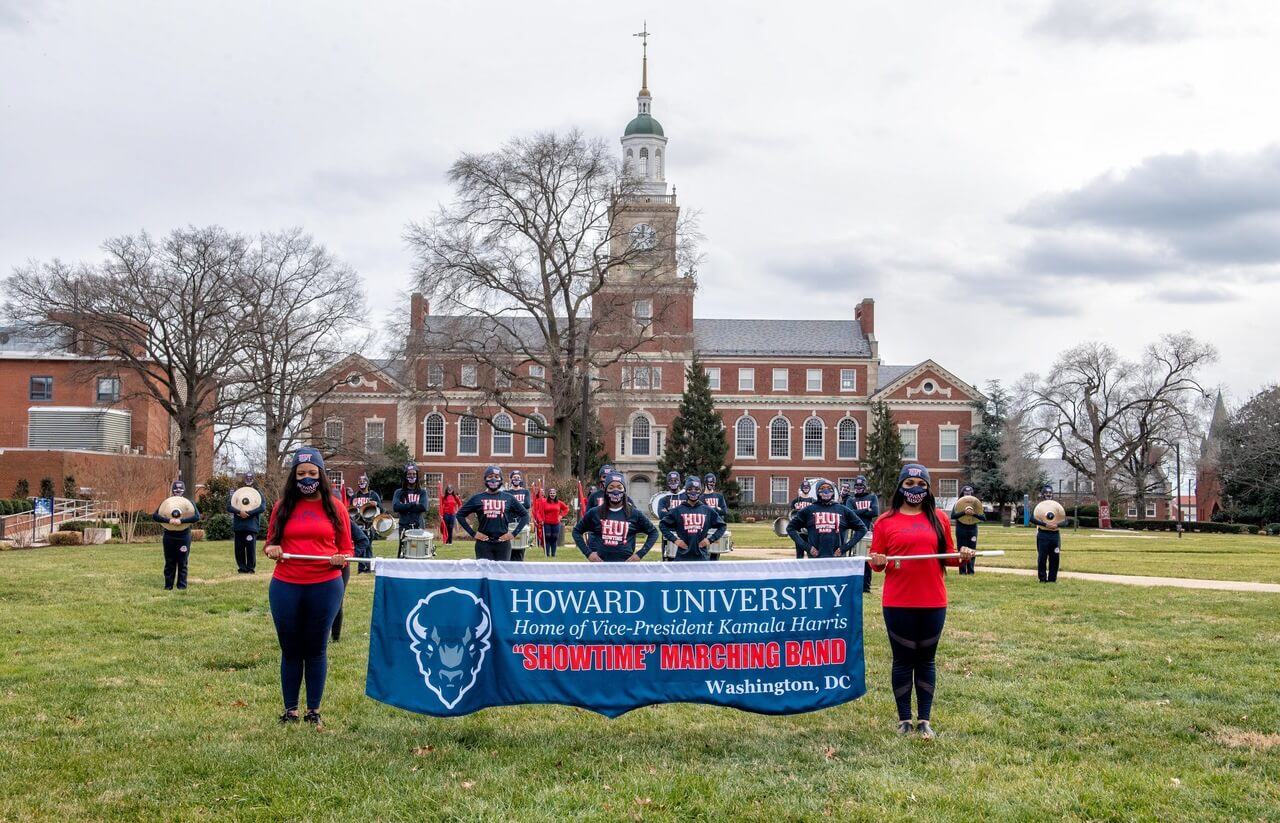 Although there’s minimal band participation, Washington is prepared because he has participated in two inauguration parades prior. “I had the pleasure to perform as a student at Southern University in 1980 for former President Ronald Reagan’s inauguration, then as associate director of the Howard University Band for former President Barack Obama and now this one would be my third,” said Washington.

This is the first time many of the band students will participate in an inauguration, and although they haven’t been together since the pandemic began, Courtney Gilliam of Dallas, Texas, a women studies graduate student and co-captain of the Flashy Flag Squad, believes they are ready.

“I think the amendments to this year’s inaugural events are appropriate for the times we are experiencing. I’ve been eager for months to see how Howard University would be included in this momentous inauguration, and it’s great to know that we’re able to safely execute traditional events and be represented as the marching band and musical heart of the vice president’s Alma Mater. As the first of many more progressive elections/inaugurations for women, it feels euphoric to be involved. I’m beyond elated to be able to participate with the Flashy Flag Squad, Ooh La La Dancers and percussion section,” said Gilliam. “Our squad has been conditioning, learning tosses and practicing dances to band music since last summer at our respective homes. So, finally hearing the heartbeat of the band, even in this small degree, is powerful for the entire band, and I’m sure the student body will be excited to see their peers help usher in our fellow Bison.”