WASHINGTON (April 9, 2019) – A new discovery regarding the diets of enslaved Africans has been made by Howard University’s 2017-18 Just Julian Scholar, Carter Clinton through research at the New York African Burial Grounds. A native of Brooklyn, New York, Clinton focuses his doctoral research at Howard University on the soil of the burial ground where the enslaved Africans were laid to rest.

His discovery comes 27 years after the discovery of more than 15,000 African bodily remains, that were buried into graves 24-feet deep underneath the bustling Lower Manhattan, New York area. In 1991, there were 419 unearthed remains sent to Howard University’s W. Montague Cobb Research Interdisciplinary Laboratory, which coordinated a historical, anthropological and biological examination of each body and the world they toiled and died in.

Carter Clinton will present an oral presentation on his research during the Howard University Research Week on Friday, April 12 at 10 a.m., at the Interdisciplinary Research Building (IRB) at 2201 Georgia Ave NW, Washington, DC 20059. 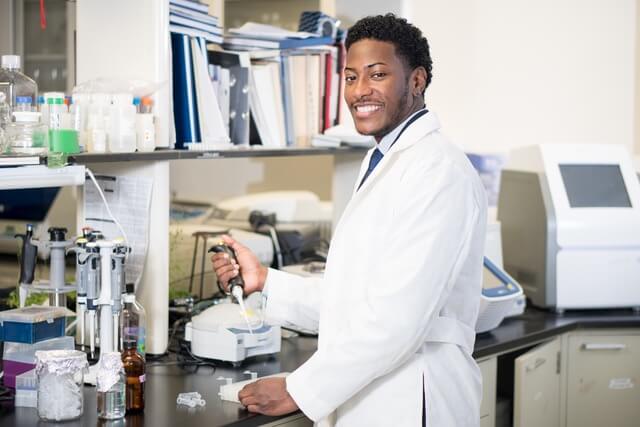 Utilizing the soil Howard University recovered from the initial excavation, Clinton is performing a bacterial DNA, soil chemistry and geospatial analysis of the New York African Burial Ground, the largest site of free and enslaved Africans in the country, which existed during the 17th and 18th centuries. Because he is focused on the soil, he has found traces of elements and metals that indicate the diets of the individuals.

“I am looking to reconstruct the lifestyles, diet, and causes of death of this historical population, as well as identifying the environmental factors that influenced their lives. Learning more about this population will help us to learn more about the identities of contemporary African Americans and the existence of slavery in New Amsterdam Colony (present-day New York City),” says Clinton.

He has discovered an elevated level of strontium, indicating a heavy vegetated diet, which is likely not by choice, according to Clinton. Additionally, he found evidence of a pottery substance, due to the nearby factory plant that was also used as a dumping ground; noting that there are high levels of arsenic, zinc, and copper.

Clinton chose this type of work to further his interest in the history of Africans that were enslaved.

“I believe the history of African Americans is a broken one. Considerable genomic research has been directed toward European populations, but not African descended populations,” explains Clinton. “I think it’s very important to address and combat the paucity of data on African peoples. Discovering one's ancestry and genomic identity is pertinent to the way in which they self-identify and are able to efficiently address generational health issues.”

Clinton also noted that there is a need for ongoing research of past discoveries and dedication of ample research that may be beneficial to other fields of work. “If ample research is not devoted to this lack of data, this population will be left behind in the increasing shift toward precision medicine leaving the healthcare industry unable to combat existing health disparities.

The Just Julian Graduate Research Assistantship has helped Clinton perform the detailed research he needed as a biology anthropology doctoral student. The Just-Julian Assistantship is designed to give Ph.D. students an opportunity to gain experience in their respective academic field by working as a research assistant on a faculty member's or an administrator’s research project or on their own project under the close guidance of a faculty member.

The award is intended to assist in preparing graduate students to undertake their own future research endeavor(s) and also to provide an opportunity to secure supplemental financial assistance through grant funding along with other external funding sources. Ph.D. students are appointed to the title Just-Julian Scholars and are selected on the basis of academic achievement, research interest/potential, and serve as a trainee under the direction and supervision of a faculty member who has an ongoing research enterprise.

“Receiving the Just-Julian assistantship was instrumental in propelling my research forward. I was also able to use my open availability to travel to complete my research at the University of Maryland, College Park in the Department of Environmental Science and Technology. I also had more time to devote to completing all DNA extractions here at Howard,” says Clinton.

Over the course of his assistantship, he has built relationships and collaborations with researchers at United States Department of Agriculture- National Resources Conservation Services (USDA-NRCS) and National Institutes of Standards and Technology (NIST) in Gaithersburg, Maryland, where he received control sample data and standard reference materials respectively. Additionally, he has been awarded two grants, including the Sigma Xi Grant-in-Aid of Research and National Geographic Explorer’s grant.

“I was able to travel to the Sigma Xi, National Scientific Research Honor Society Student Research Conference where I won the top presenter award in the graduate division for the anthropology category, the first in Howard University’s history,” said Clinton.

Clinton was recently awarded the 2019 Cosmo Scholar - Henry H. Work Science Award from the Cosmo Club Foundation for his work; he was a 2017-2018 National Geographic Explorer, and he previously worked as an intern at the National Institutes of Health – National Human Genome Research Institute during the summer of 2018. He is hopeful about continuing his research and opportunities in 2019.