WASHINGTON – Howard University’s Office of Undergraduate Studies (OUS) has launched the “Second Year Experience (SYE): Mecca Made” program, a university-wide initiative designed to increase second-year retention rates and on-time degree completion. The program was developed as a part of the HBCU Student Success Project funded by Lumina. The purpose of the project is to assist three HBCUs, Howard University, Morgan State University, and Dillard University, in implementing promising institutional policies to increase degree attainment for all students and to reduce the degree attainment gap between the overall undergraduate population and targeted groups.  The HBCU Student Success Project supports Lumina’s commitment to increase the proportion of Americans with high-quality degrees, certificates and other credentials to 60 percent by the year 2025. 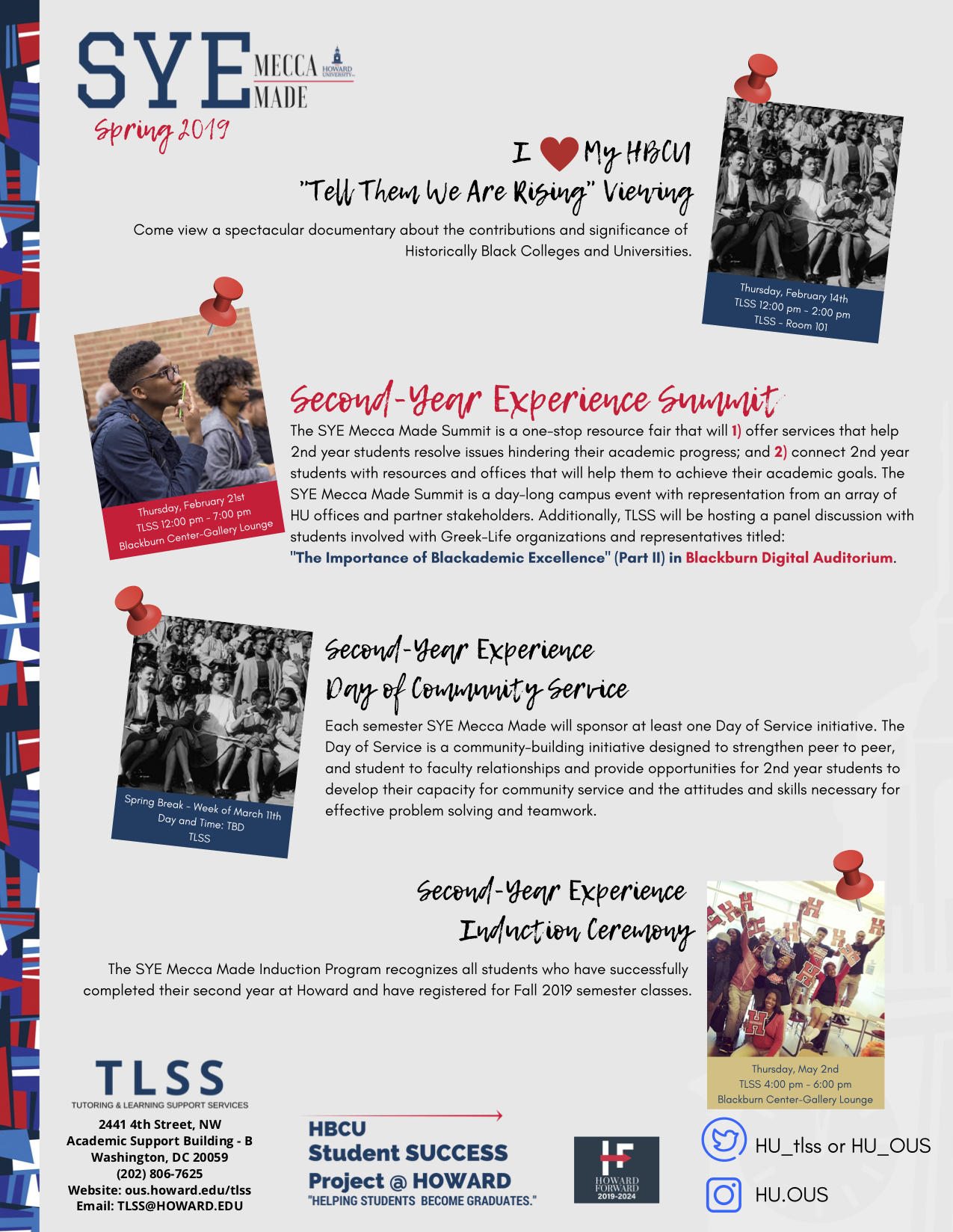 “It was important for us to better understand how student success initiatives and programs throughout the university were aligned with our retention goals and to make sure those efforts were grounded in what our data were telling us,” says Carter.

OUS was established in 2014, under the leadership of President Wayne A.I. Frederick, to adopt approaches based on evidence about student experiences and using that knowledge to make meaningful and strategic decisions.

“Lumina through the HBCU Student Success Project grant, has helped us do that and we were able to invest in those areas where we knew we needed to focus,” says Carter.

SYE: Mecca Made has three major components: SYE Month, the SYE Summit, and the SYE Mecca Made Induction Program.

Led by OUS’ Office of Tutoring & Learning Support Services, the SYE Summit will take place in Spring 2019 as a day-long campus event with representation from an array of Howard offices and partner stakeholders. The summit will offer services that will help students to resolve issues hindering their academic progress and connect students with resources and offices that will help them achieve their academic goals.

This May, the Mecca Made Induction Program will launch. The program will recognize all students who have successfully completed their second year at Howard and have registered for fall semester classes.

Another product of the Lumina grant has proven beneficial, called Bison Adviser, which is a predictive-analytics and advising platform. These initiatives complemented prior OUS programs, including the GOT 15? Campaign, which has been instrumental in increasing the number of students who register for at least 15 credit hours per semester.

In addition to OUS-sponsored programs, the department created an Undergraduate Academic Advisers Council, an OUS Advisory Board and an OUS Student Advisory Committee, known as O-SAC.

“We’ve really tried to be diligent about building our partnerships,” said Carter. “By engaging multiple stakeholders, we have communicated that we all have a critical role in ensuring that our students graduate and graduate on time. As a result of this and other initiatives, we’ve seen a tremendous increase in our retention and graduation rates.”

About the Office of Undergraduate Studies

The mission of Office of Undergraduate Studies (OUS) is to facilitate the successful matriculation of students by offering academic and career support services that result in increased rates in persistence, retention, four-year degree completion, and job placement rates.  OUS is comprised of four units; The Center for Academic Excellence, the Office of Honors and Scholar Development, Tutoring and Learning Support Services and the Office of Career Services.

To find out more about the Office of Undergraduate Studies, visit: https://ous.howard.edu/.

To learn more about SYE: Mecca Made, visit: https://ous.howard.edu/tutoring-learning/second-year-experience.