With the 2022 midterm elections sparking fears about everything from voter suppression to threats to democracy, Howard University is doing its part to weed through the misinformation.

Journalism students and faculty in the Department of Media, Journalism and Film in the Cathy Hughes School of Communications will be covering local, state and national races, as well as issues important to the Black community through the 2022 Howard University Election Project.

Students will work Election Day from approximately 6:30 am before the polls open until the wee hours of Wednesday morning when many of the results will be in. They will fan out to local polling places in Washington, D.C.; Maryland, and Virginia, as well as other locations to cover local races including the D.C. mayoral contest and the Maryland governor’s race, in which Wes Moore is expected to become the first Black governor of the state.

Some students will be embedded at the Ronald Walters Election Day Command Center, a joint effort between The Ronald Walters Leadership and Public Policy Center at Howard University and the National Coalition on Black Civic Participation (NCBCP). The Center tracks voter suppression, Black voter turnout and problems at voting precincts. 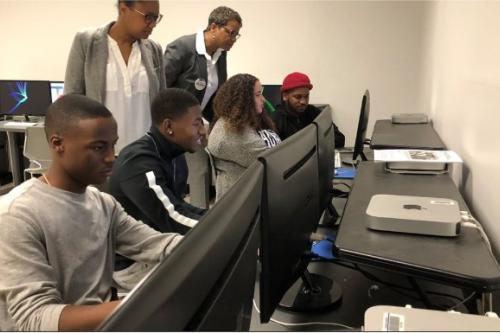 Alumni and professional volunteers will also be taking part in the Election Project, as well as students from Georgia State University.

“It's a big operation sending students all over the region and then having people to edit their stories in real time,” says Yanick Rice Lamb, professor and former chair of the Department of Media, Journalism and Film. Lamb, along with Jennifer C. Thomas, associate professor and Journalism sequence coordinator, are overseeing the project.

Participants will also be doing fact-checking and social media updates on Election Day, as well as audio and newscasts. “There are a lot of moving parts,” Lamb says. “It's energizing for the students, but it's also energizing for the faculty and the professional volunteers and alumni who are participating.”

The work will be distributed through the Howard University News Service (HUNS) website, which provides coverage of national and local events to the National Newspaper Publishers Association’s 200 member newspapers and web sites. HUNS has also had articles picked up by such outlets as The Root, TheGrio and The Washington Post. The students’ work will also air on Howard’s PBS affiliate WHUT-TV and will be available to WHUR.

Howard first started covering elections in a major way when President Obama ran for president for the first time in 2008. Since then, students have covered presidential and midterm elections, as well as the Democratic and Republican national conventions. Students and alumni are also winners of Pulitzer, Peabody, Emmy, Hearst, National Society of Professional Journalists and National Association of Black Journalists awards.

This year’s participants have received guidance from journalists, political analysts and voting rights experts in the weeks leading up to Election Day. For example, Shaquille Brewster (BA ’14) an NBC political reporter covering the Wisconsin races, spoke to the students about how working on the Election Project when he was at Howard helped to prepare him for his current job.

Being able to cover such an important election gives students a sense of confidence that they will be able to handle primetime assignments in their careers. “The project has given me a taste of what it will be like in the real world as a journalist,” says Joshua Heron, a senior journalism major. “I’ll know what it’s like to participate in election day on an intense level.”

Heron is covering the Georgia Senate race between Democrat Rafael Warnock and Republican Herschel Walker. He’s been getting updated information from each campaign, monitoring the polls and making phone calls to interview campaign workers and residents of Georgia.

With so much scrutiny on the midterms and the intense polarization across the country, students know this election is far from business as usual.

“I think [the political climate has] reinforced the importance of what they do and why it's important to tell these stories as journalists and also to cut through the misinformation and disinformation,” says Lamb.