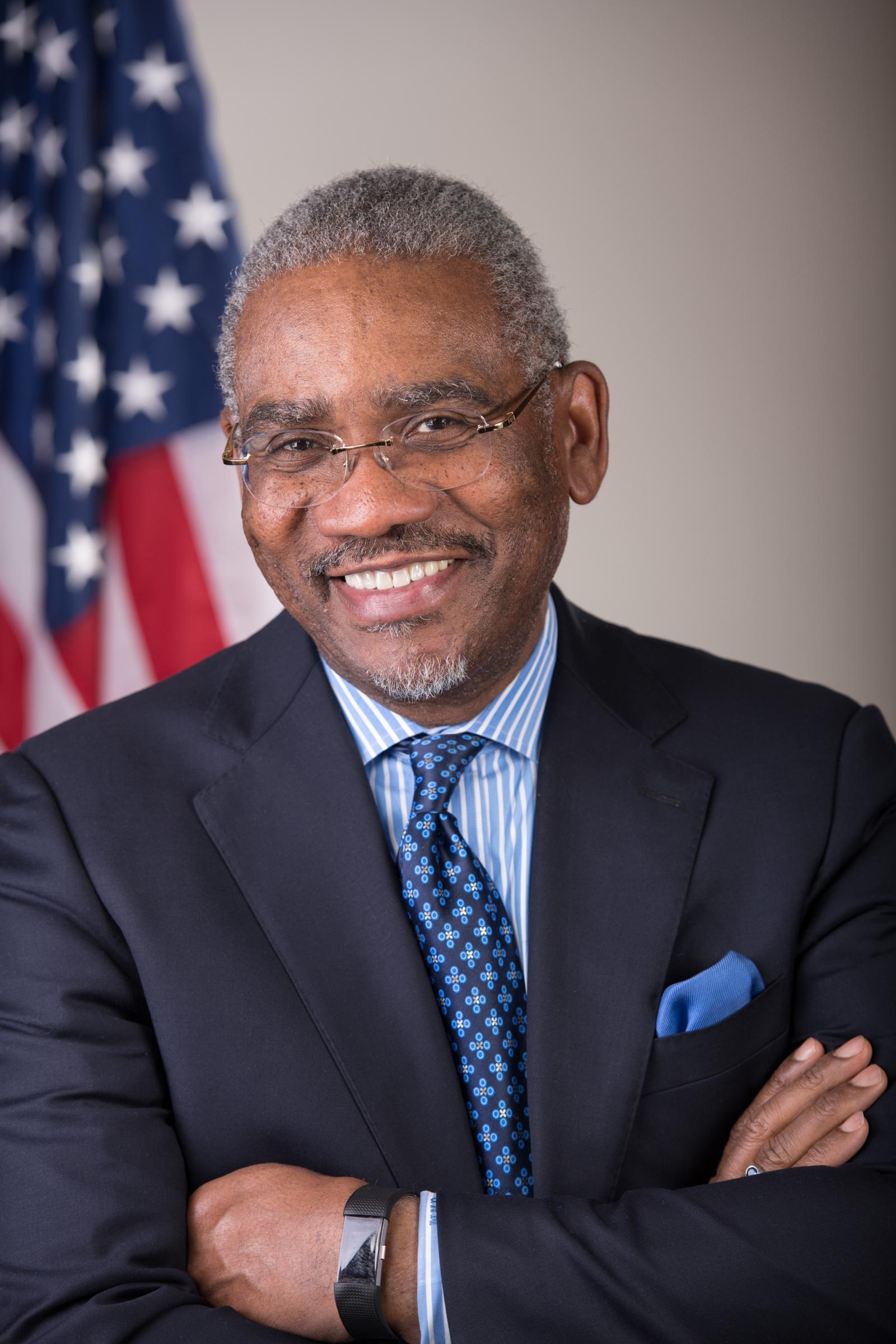 From public housing to the nation's Capital, Gregory Weldon Meeks has lived a true American success story. Known for his compassionate and tenacious representation of his constituents, and his coalition-building skills, Meeks proudly serves the constituents of New York's Fifth Congressional District in the U.S. House of Representatives.

Congressman Meeks' compassion and ability to collaborate are rooted in his upbringing. His family ventured north during the Great Migration from Rock Hill, South Carolina, eventually settling in East Harlem. He grew up in a public housing project and knew in his early years that he wanted to be a lawyer. He was inspired by a mother and father who worked hard to ensure that their children would have opportunities for advancement that they never did. Meeks' parents passed on to him a profound sense of social justice, commitment to community, and willingness to extend a helping hand to those in need.

He carried these values with him to Adelphi University where he earned a bachelor's degree in history. At Howard University Law School, Meeks embraced the jurisprudence of his idol, Thurgood Marshall, and of Charles Hamilton Houston. In the years to follow, Congressman Meeks worked as a Queens County Assistant District Attorney, a prosecutor for a special anti-narcotics taskforce, and chief administrative judge for New York State's worker compensation system. In 1992, he was elected to the New York State Assembly, where he served until 1998, when he won a special election to represent the Fifth Congressional District of New York.

Congressman Gregory W. Meeks, now in his thirteenth term, has devoted his energy and skill to serving one of the most diverse constituencies in the nation. His efforts on behalf of his district, New York City and State, and the nation as a whole have earned Rep. Meeks the respect of his constituents, New Yorkers, and Democrats and Republicans alike. He is known for being an effective, principled, and common sense leader. As a fervent supporter of the Affordable Care Act enacted under President Obama, Congressman Meeks believes that it should be enhanced. Congressman Meeks is part of the forward-thinking, pro-growth Democratic members who comprise the New Democrat Coalition (NDC), the largest ideological caucus in Congress. He co-chairs the NDCC Trade Task Force.

Congressman Meeks is Chairman of the House Foreign Affairs Committee, the first black Member of Congress to serve as Chair of that committee. Meeks is a multilateralist with decades of experience in foreign policy. He believes that the United States should build coalitions around our interests and work with other countries to build a stable and prosperous future.

He is a senior member of the House Financial Services Committee, where he served as the Chairmen of the Subcommittee on Consumer Protection and Financial Institutions which oversees all financial regulators such as, FDIC, Federal Reserve and all matters pertaining to consumer credit and the stability of the banking system. Rep. Meeks previously served as a Dodd-Frank conferee. Key provisions in the Wall Street reform law – including its stress testing requirement, the creation of the Office of Minority and Women Inclusion at the financial regulatory agencies, and the requirement that U.S. public companies who use natural resources to report their due diligence in stamping out conflict minerals– were co-authored by Congressman Meeks and remain in the law today. Rep. Meeks introduced a bill that would require government contractors and public companies to submit data on the racial, ethnic, and gender composition of their corporate boards.

If you're interested in learning more, please refer to the Committees and Caucuses page.

Congressman Meeks is focused on revitalizing the economy, creating jobs, and enhancing the resiliency of the Fifth District's transportation, housing and environmental infrastructure, which were hit hard by Superstorm Sandy.

Throughout his tenure in Congress, Congressman Meeks has fought to make New York City accessible and full of opportunity for all New Yorkers. One result of Representative Meeks' tireless efforts came to fruition in April of 2017, at the groundbreaking ceremony of the Crossing at Jamaica Station. The housing and retail project, which will bring approximately 4,000 construction jobs to Jamaica, includes hundreds of new affordable residential units. To make this crucial economic development possible, Congressman Meeks secured $21 million in federal tax credits.

Ever striving to improve NYC's accessibility, Congressman Meeks strengthened the major regional transportation hub in Jamaica, Queens via the Intermodal Enhancement and Atlantic Avenue Extension—which includes parts of the LIRR and NYC subway system, Airtrain connection to JFK Airport, and a total of 31 bus lines. He secured over $6 million and $10 million through the Federal Transit Administration and Federal Highway Administration respectively, to vastly improve transportation in his district, especially to and from JFK airport. Congressman Meeks also worked with Governor Cuomo to provide a significant $10 billion upgrade to JFK Airport. Ever focused on increasing diversity, Congressman Meeks advocated for Minority and Women Business Enterprises (MWBEs) in the bidding process.

Increasing diversity in all sectors of the economy is important to Congressman Meeks and in 1999 he secured $250,000 in federal funding to initiate the Science Engineering Mathematics and Aerospace Academy (SEMAA) at CUNY's York College. The SEMAA program continues to educate and inspire young students to this day.

Not only has Congressman Meeks worked to build up Jamaica, but he has been keen on building up Far Rockaway, too. To this end, Congressman Meeks collaborated on the monumental Roadmap for Action, introduced in 2016, which will provide $91 million for the revitalization of Downtown Far Rockaway. These funds marked the continuation of Meeks' ongoing effort to increase affordable housing options, improve transportation infrastructure, and boost the local economy.

Additionally, in the spring of 2017, Congressman Meeks and New York City launched a new ferry service, "NYC Ferry," in the Rockaways a month ahead of schedule. This critical project had been in the works since 2005, when Representative Meeks procured $15 million in federal funding.

For years, Congressman Meeks has introduced a bill to allow for fairness in the recoupment of disaster assistance, to help not only his district rebuild after Superstorm Sandy, but also other districts suffering from natural disasters.

Congressman Meeks is a member of the Allen AME Church in St. Albans, New York and a proud member of Alpha Phi Alpha Fraternity. As a huge sports fan, Meeks enjoys watching the New York Knicks, the New York Giants, and the New York Mets. He is married to Simone-Marie Meeks and has three daughters – Ebony, Aja, and Nia-Aiyana.