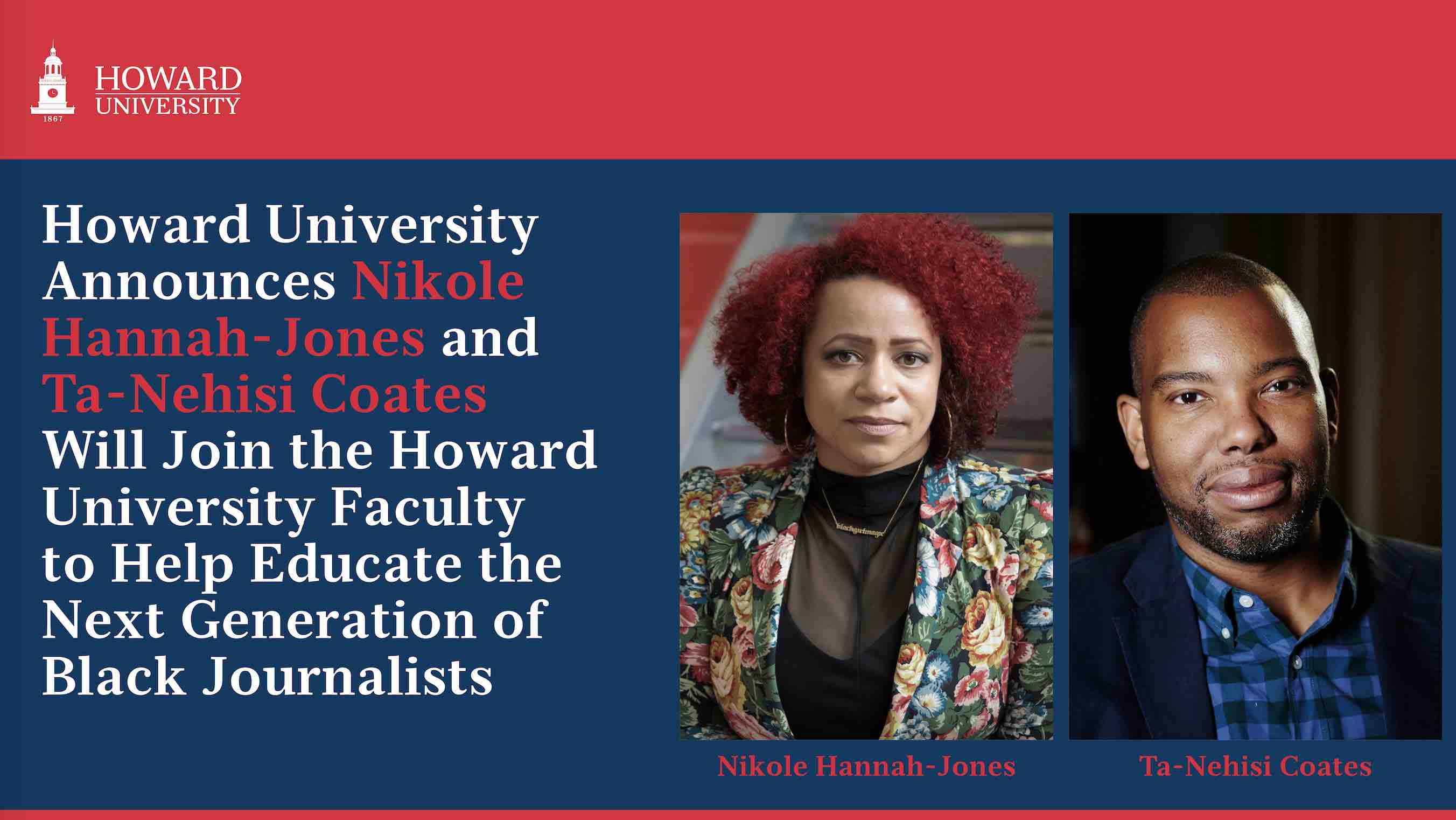 WASHINGTON – Howard University announced today that Nikole Hannah-Jones and Howard alumnus Ta-Nehisi Coates will join the Howard University faculty. Hannah-Jones will be a tenured member of the faculty of the Cathy Hughes School of Communications, filling the newly created Knight Chair in Race and Journalism. Coates, journalist and author, will be a faculty member in the flagship College of Arts and Sciences. Hannah-Jones, Pulitzer Prize-winning journalist, will also found the Center for Journalism and Democracy, which will focus on training and supporting aspiring journalists in acquiring the investigative skills and historical and analytical expertise needed to cover the crisis our democracy is facing. The center hopes to work across multiple historically Black colleges and universities (HBCU) that offer journalism degrees and concentrations.

The appointments are supported by nearly $20 million donated by Knight Foundation, the John D. and Catherine T. MacArthur Foundation and the Ford Foundation, as well as by an anonymous donor, to support Howard’s continued education of and investment in Black journalists.

“It is my pleasure to welcome to Howard two of today’s most respected and influential journalists,” said Wayne A. I. Frederick, M.D., MBA, president of Howard University. “At such a critical time for race relations in our country, it is vital that we understand the role of journalism in steering our national conversation and social progress. Not only must our newsrooms reflect the communities where they are reporting, but we need to infuse the profession with diverse talent. We are thrilled that they will bring their insights and research to what is already a world-class, highly accomplished team of professors.

“Further, we are grateful to the Knight, MacArthur and Ford foundations, as well as to an anonymous donor, for their support in our continued efforts to train the next generation of journalists and to provide a diverse pipeline of talent to America’s newsrooms,” said President Frederick.

Hannah-Jones, the creator of the 1619 Project, will be the inaugural Knight Chair in Race and Journalism and will begin her faculty role this Summer. Award-winning author Coates will hold the Sterling Brown Chair in the Department of English and will begin this position following completion of several current obligations.

“I am so incredibly honored to be joining one of the most important and storied educational institutions in our country and to work alongside the illustrious faculty of the Cathy Hughes School of Communications and the brilliant students it draws in,” Hannah-Jones said. “One of my few regrets is that I did not attend Howard as an undergraduate, and so coming here to teach fulfills a dream I have long carried. I hope that the decision that Ta-Nehisi and I made to bring our talents to an HBCU will lead others to make a similar choice.

“We are at a critical juncture in our democracy, and yet our press does not reflect the nation it serves and too often struggles to grasp the danger for our country as we see growing attacks on free speech and the fundamental right to vote,” Hannah-Jones continued. “In the storied tradition of the Black press, the Center for Journalism and Democracy will help produce journalists capable of accurately and urgently covering the challenges of our democracy with a clarity, skepticism, rigor and historical dexterity that is too often missing from today’s journalism. I am so grateful to the Ford, Knight and MacArthur foundations for the initial funding to launch the center and hope to very quickly meet the center’s $25 million fundraising goal.”

For 50 years, the Howard University School of Communications has trained the nation’s top communicators and media professionals, from award-winning news anchors and journalists to filmmakers, public relations executives and researchers. The school will celebrate its 50th anniversary during the 2021-22 academic year, highlighting its history of disseminating truth through communications and providing community service through storytelling.

The College of Arts and Sciences (COAS) is at the heart of Howard University, recognized worldwide as a premier, comprehensive research university. COAS is often referred to as the University’s flagship because it is the oldest and the largest of the University’s 13 schools and colleges. Its predecessor was founded in the second year of the University’s existence, and today it enrolls more than 3,000 students – making it the most popular choice among Howard’s undergraduates.

Three foundations and an anonymous donor have contributed nearly $20 million to support the University’s demonstrated academic and journalistic excellence.

Knight Foundation is providing $5 million total to establish an endowment at Howard University to support a Knight Chair in Race and Journalism and to develop symposia, directed by the Knight Chair, to support journalism students and faculty across the network of HBCUs. Howard selected Hannah-Jones as the inaugural Knight Chair.

The John D. and Catherine T. MacArthur Foundation is providing a $5 million grant to support the Center for Journalism and Democracy. Up to $1.25 million of the funding will be dedicated to supporting the next phase of the 1619 Project. Hannah-Jones and Coates are both MacArthur Fellows from the class of 2017 and 2015 respectively.

The Ford Foundation will provide $5 million for general operating support for the creation of the center at Howard University, which will be spearheaded by Hannah-Jones. Ford’s funding is designed to support the infrastructure of the center and its programs to help increase the number of Black professionals entering journalism and enhance their career-readiness.

An anonymous donor contributed $5 million to fund the Sterling Brown Chair in English and Humanities and to establish the Ida B. Wells Endowed Fund to support the Knight Chair.# # #

Founded in 1867, Howard University is a private research university that is comprised of 14 schools and colleges. Students pursue more than 140 programs of study leading to undergraduate, graduate and professional degrees. The University operates with a commitment to Excellence in Truth and Service and has produced one Schwarzman Scholar, three Marshall Scholars, four Rhodes Scholars, 12 Truman Scholars, 25 Pickering Fellows and more than 165 Fulbright recipients. Howard also produces more on-campus African-American Ph.D. recipients than any other university in the United States. For more information on Howard University, visit www.howard.edu.

About the John S. and James L. Knight Foundation

Knight Foundation supports democracy in America by fostering informed and engaged communities. The foundation invests in journalism, arts and culture in community, research in areas of media and democracy, and in the success of cities and towns where John S. and James L. Knight once published newspapers. For more, visit kf.org.

About the John D. and Catherine T. MacArthur Foundation

The John D. and Catherine T. MacArthur Foundation supports creative people, effective institutions and influential networks building a more just, verdant and peaceful world. MacArthur is placing a few big bets that truly significant progress is possible on some of the world’s most pressing social challenges, including advancing global climate solutions, decreasing nuclear risk, promoting local justice reform in the U.S., and reducing corruption in Africa’s most populous country, Nigeria. In addition to the MacArthur Fellows Program and the global 100&Change competition, the foundation continues its historic commitments to the role of journalism in a responsive democracy as well as the vitality of our headquarters city, Chicago. For more information, visit macfound.org.

About the Ford Foundation

The Ford Foundation is an independent, nonprofit grant-making organization. For 85 years it has worked with courageous people on the frontlines of social change worldwide, guided by its mission to strengthen democratic values, reduce poverty and injustice, promote international cooperation, and advance human achievement. With headquarters in New York, the foundation has offices in Latin America, Africa, the Middle East and Asia.