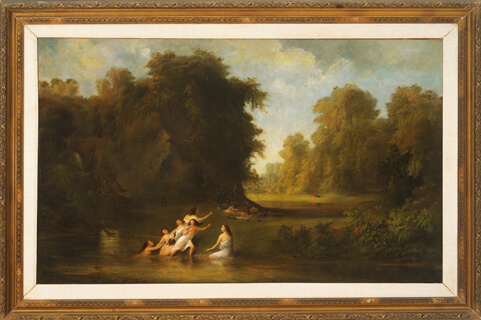 WASHINGTON - In honor of the reopening of the Howard University Gallery of Art, after a two-year closure due to COVID-19, the galleries of the Chadwick A. Boseman College of Fine Arts will feature a selection of African-American masterworks, including recent acquisitions from the Ronald W. and Patricia Walters, Lois Mailou Jones and James A. Porter collections. Among the artists included are 19th-century landscape painters Robert S. Duncanson and Edward Mitchell Bannister; neoclassical sculptor Edmonia Lewis; and leading 20th-century artists, such as Henry O. Tanner, Aaron Douglas, Hale Woodruff, Jacob Larewnce, Archibald Motley, Charles White, Augusta Savage, Faith Ringgold, Benny Andrews and Alma Thomas. According to Lisa Farrington, director of the gallery, “This exhibition features paintings, sculptures and works on paper by a veritable who’s who of African-American art.”

Intended for students and the general public, the exhibition will be on display from January 22 to March 7, 2022 in the University’s Gallery of Art in Childers Hall on the main campus.

Curated by Scott Baker with support from Abby Eron, registrar, and Farrington, the exhibit celebrates the depth and breadth of the Howard art collection, which has grown exponentially in recent years thanks to generous gifts from artists and patrons, and in no small measure to the support of Dr. Wayne A. I. Frederick, Howard’s president. Dr. Frederick’s commitment to the arts has allowed not only for this growth but for the elevation and renaming of the Division of Fine Arts to the Chadwick A. Boseman College of Fine Arts and for the appointment of the esteemed Phylicia Rashad as dean of the new college.

Generous support for this project was provided by the Art Bridges Foundation. Additional support received from IMLS (the Institute of Museum and Library Services) and the Andrew W. Mellon Foundation has made it possible, for the first time in the gallery’s history, for works of art from the Howard University collection to be available to the public online via the state-of-the-art eMuseum platform of Gallery Systems. A comprehensive digital inventory has been created using TMS (The Museum System) collections management database platform. In addition, several critical works of art have been expertly conserved.

The Howard University Gallery of Art of the Chadwick A. Boseman College of Fine Arts was founded as “the Historical Picture Gallery” by General Oliver Otis Howard in 1870 for “the enlightenment of students.” It was officially established as the Gallery of Art in 1928 by action of the Board of Trustees to “make revolving exhibitions of contemporary arts and crafts available for visitation and study.” The gallery formally opened on April 7, 1930 with a traveling exhibition of oil paintings, watercolors and drawings assembled and circulated by the College Art Association of America. After the success of this exhibition, a policy and program leading to the development of a permanent collection was adopted. James V. Herring, founder of the Department of Art, and James A. Porter, internationally renowned art historian and critic, were the earliest directors.

Henry O. Tanner’s “Return from the Crucifixion,” an oil tempera painting, which is the last completed work of the artist, was one of the earliest acquisitions. This historic work is still a jewel of the collection. Since the initial acquisition, numerous purchases and gifts from friends and faculty of the University, private collectors, art foundations, and various branches of the federal government have entered the permanent collection. The artifacts of Alain Locke, the esteemed philosopher, began the encyclopedic collection of African artifacts, while the Kress Foundation set up the collection of Renaissance and Baroque paintings. Other significant contributions and acquisitions have included the Irving Gumbel Collection of European Prints from the 16th to the 19th centuries, the Ronald W. and Patricia Walters Collection of African American art, the James A. Porter Collection, and the Lois Mailou Jones collection.