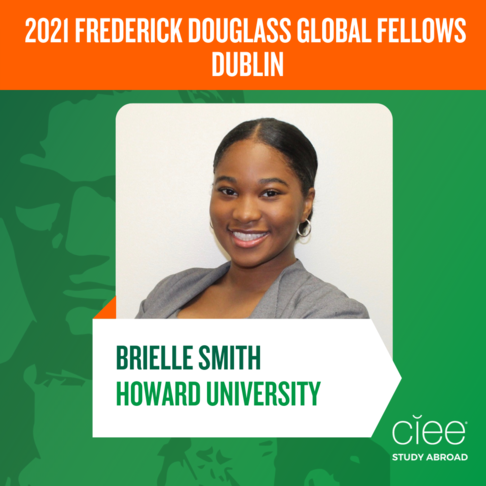 WASHINGTON – Howard University sophomore Brielle Smith has been selected as a 2021 Frederick Douglass Global Fellow, an honor awarding her a full scholarship to represent Howard University in a Summer study abroad program concentrated on leadership, intercultural communication and social justice.

Smith is one of 14 high-achieving, diverse student leaders selected for this esteemed award. She is accepting this fellowship alongside prominent students from Harvard University, the University of Miami and the Xavier University of Louisiana.

A communications major, Brielle was selected as a Frederick Douglass Global Fellow because of her academic excellence, communication skills and commitment to social justice. Brielle ultimately plans to tackle social issues, such as poverty and homelessness, on a global scale. She is eager to prepare for that future by cultivating her intercultural knowledge and awareness through an international education experience.

“In order to be a global leader, I have to understand that diversity goes beyond skin. I also have to experience that diversity is made up in culture,” she said in her application video. “I know that to be more culturally sensitive and culturally aware of everything going on around me, I need to get out there and study abroad.”

In Ireland, Frederick Douglass Global Fellows will study leadership, effective communication and strategies to effect positive social change as they explore the life stories and legacies of Frederick Douglass and Daniel O’Connell.

“Frederick Douglass was transformed by his time in Ireland and returned to America in 1847 as a free man, spending the next 50 years of his life agitating for positive change in our world,” said James P. Pellow, president and CEO of CIEE. “We know this group of exceptional students will have a similar transformative experience in Ireland and return home with enhanced skills and passion to change our world for the better.”

Founded in 1867, Howard University is a private, research university that is comprised of 13 schools and colleges. Students pursue more than 140 programs of study leading to undergraduate, graduate, and professional degrees. The University operates with a commitment to Excellence in Truth and Service and has produced one Schwarzman Scholar, three Marshall Scholars, four Rhodes Scholars, 12 Truman Scholars, 25 Pickering Fellows, and more than 165 Fulbright recipients. Howard also produces more on-campus African American Ph.D. recipients than any other university in the United States. For more information on Howard University, visit www.howard.edu.

About the Council for International Educational Exchange (CIEE)

CIEE is a nonprofit study abroad and intercultural exchange organization that transforms lives and builds bridges between individuals and nations by sponsoring a wide variety of opportunities for the exchange of ideas and experiences. CIEE helps people develop skills for living in a globally interdependent and culturally diverse world and contributes to a more peaceful global community by humanizing international relations. For more information on Howard University, visit www.ciee.org.