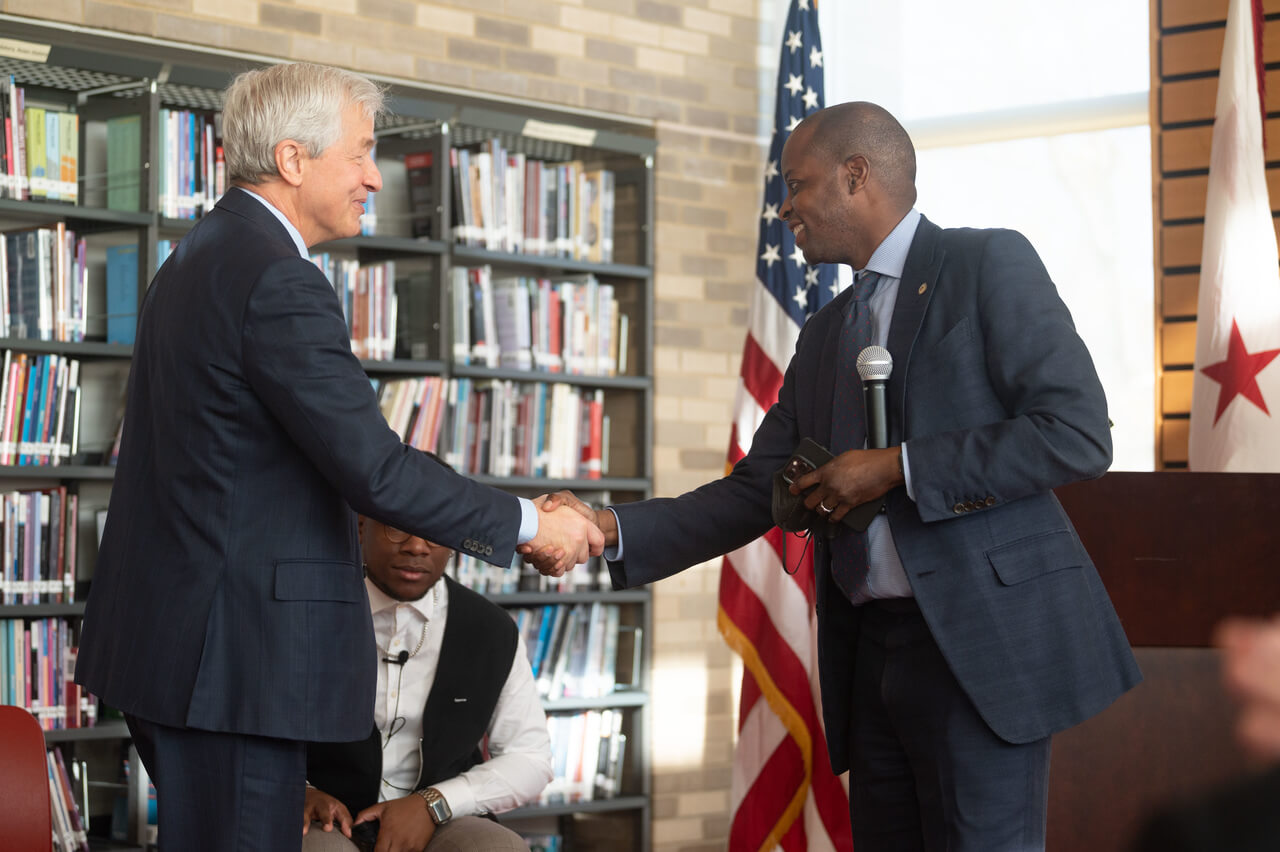 WASHINGTON – During a launch event at Dunbar High School with JPMorgan Chase and Youth Guidance to announce the D.C. expansion of their respective programs, The Fellowship Initiative (TFI) and Becoming a Man (BAM), Howard University President Wayne A. I. Frederick announced the University would grant two full-tuition scholarships to District of Columbia Public Schools (DCPS) participants who graduate from the academic, social, emotional and career readiness program.

Howard has long held a commitment to educate, support and inspire Black and brown men and women in American society and throughout the world. In each of its 14 schools and colleges, Howard University seeks to develop technically competent and morally committed individuals, and both the BAM and TFI programs further that mission.

Dr. Frederick surprised the audience of young men and his staff with the news on December 1 while sharing his closing remarks.

“Students at D.C. Public Schools are some of the brightest and most ambitious I have ever encountered. All they need to excel in life, to become a leader in their chosen professions and to realize their full potential is an opportunity,” said Dr. Frederick. “We are privileged to support two DCPS graduates who decide to matriculate to Howard. These students will undoubtedly impact and change the world around them, and I am excited that Howard will play an essential part in their story as the University has played an integral role in mine.”

JPMorgan Chase agreed to match Howard University's award, with the partnership offering a total of four full-tuition scholarships to TFI/BAM graduates of DCPS who apply and are accepted into the University. Students must maintain a GPA of at least 3.2 to obtain their scholarship.

Dr. Frederick also announced that Howard University would cover the remaining tuition for Sagid Mohamed, Howard sophomore and alumnus of the TFI program, whose tuition was previously only partially funded by financial aid and scholarships. Mohamed spoke at the event about how his TFI experience prepared him to succeed at Howard.

“It’s amazing to see such large companies truly believe in the importance of investing in young men of color and communities of color,” said Mohamed. “And then at the end [of the event], I got surprised with a scholarship, and I got caught off guard. I’m speechless. It’s surreal. I’m forever thankful to Howard University and Dr. Wayne Frederick.”

The multiyear school-based program will deliver academic coaching, college and career readiness services, social and mental health support, and leadership development to hundreds of high school students to help put them on a path toward greater economic mobility. Students will also be matched with a mentor and licensed clinical counselor.

JPMorgan Chase’s The Fellowship Initiative launched in 2010 and provides comprehensive and hands-on academic, mental health and wellness support to young men of color in high school. Over the last decade, TFI has matched more than 350 high school fellows in New York, Chicago, Dallas and Los Angeles with JPMorgan Chase mentors. In 2020, TFI committed to expanding the program to 1,000 more fellows nationally over the next 10 years and has since expanded to Houston and Oakland. The firm’s commitment to the D.C. program is part of its broader $30 billion racial equity commitment and builds on a $350 million, five-year global initiative to prepare people for the future of work.

The BAM program has received national recognition from former President Obama as an evidenced approach to trauma reduction and violence prevention for young men of color who are at risk of being involved in violent crime or dropping out of high school. Recent research reveals that while around 94 percent of BAM participants have encountered trauma and around 70 percent report symptoms of depression, nearly 60 percent report a substantial decrease in feelings of depression after one year of participation.

JPMorgan Chase & Co. (NYSE: JPM) is a leading global financial services firm with assets of $3.7 trillion and operations worldwide. The firm is a leader in investment banking, financial services for consumers and small businesses, commercial banking, financial transaction processing, and asset management. A component of the Dow Jones Industrial Average, JPMorgan Chase & Co. serves millions of customers in the United States and many of the world’s most prominent corporate, institutional and government clients under its J.P. Morgan and Chase brands. Information about JPMorgan Chase & Co. is available at www.jpmorganchase.com.

Youth Guidance creates and implements school-based programs that enable youth to overcome obstacles, focus on their education and, ultimately, to succeed in school and in life. Youth Guidance is a leading provider of outcomes-driven programs and capacity-building initiatives, directly serving more than 13,000 youth across Chicago, Boston, Seattle, Los Angeles, and London. Our strategically developed delivery areas are counseling & prevention, community & afterschool programming, and youth workforce development.