The Bison spirit was alive in downtown Cleveland, Ohio during this year’s star-studded weekend of events recognizing HBCU excellence

The Howard University men’s basketball team made history as the inaugural winners of the first-ever NBA HBCU Classic presented as part of the NBA All-Star Weekend in Cleveland, Ohio. The Howard Bison went head-to-head against the Morgan State Bears, with the Bison pulling out a 68-66 win in the last minute of the game.

The Bison spirit was felt throughout the Wolstein Center, the site of the inaugural competition, and the rest of downtown Cleveland as Howard students, staff, and alumni descended on the city for the weekend’s events.

“In today’s world, the NBA is much more than a sports and entertainment industry. Players are so much more than just athletes and entertainers. They are outspoken advocates and philanthropists. They are powerful changemakers who leverage their resources to inspire real action,” said President Wayne A.I. Frederick who sat courtside next to the Howard team. “I am immensely grateful to the NBA for welcoming Howard to this season’s All-Star game festivities. There is no better place to celebrate the history of HBCUs and showcase how bright the future is for our institutions and our students.”

Prior to the start of the game, the Howard University Showtime Marching Band performed with award-winning actress, musical artist and TV personality Keke Palmer, who sang “Lift Every Voice and Sing” and the national anthem.

The Howard Bisonettes took center-court for a half-time performance, ahead of the band’s second showing of the night. Members of the Royal Court energetically cheered and danced, showing their support from the stands. One of the Howard cheerleaders received a special surprise during a free throw challenge sponsored by MNT DEW. Howard cheerleader Maya Higginbothom, who participated in the challenge, was shocked to find out she will receive a $50,000 scholarship based in part on her 4.0 GPA.

By hosting the Mid-Eastern Athletic Conference (MEAC) matchup between the Howard and Morgan State teams as part of All-Star weekend, the NBA and AT&T succeeded in highlighting the legacy and importance of HBCUs through a globally recognized platform. As part of the NBA’s and AT&T’s respective ongoing commitments to HBCUs, they donated $100,000 to each institution to support facility upgrades, academic resources, and health and wellness services. 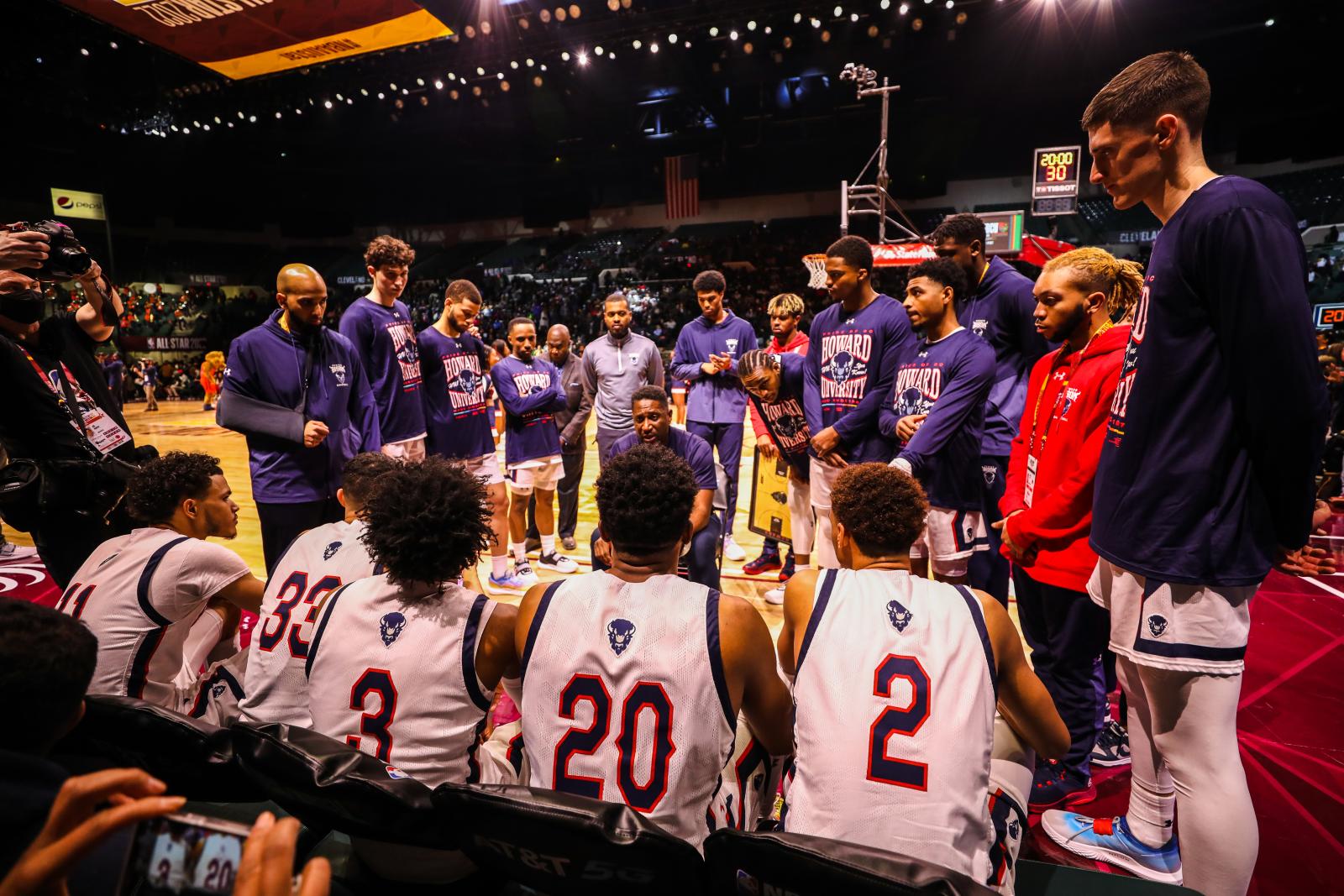 “There is a natural connection between the NBA and HBCUs,” said Howard University Director of Intercollegiate Athletics Kery Davis. “We share a commitment to excellence and a devotion to serving Black communities. We are natural partners, and I am excited to continue our partnership. I am so proud of the men’s basketball team. Congratulations to Coach Kenneth Blackeney, as well as all the players, and thank you to all of the HBCU supporters who helped make this event a success.”

NBA All-Stars and celebrities filled the stands and the team’s players benefitted from the opportunity to meet some of them. All-Stars Stephen Curry and Chris Paul met with both the teams in their locker rooms before the game, while others like Milwaukee Bucks star Kris Middleton sat courtside during the game. Award-winning filmmaker and long-time advocate for HBCUs Spike Lee also sat courtside.

After the game, the Howard University Alumni Club of Cleveland brought alumni and friends together for a reception at Zanzibar Soul Fusion. Alumni representing clubs from New York, Washington, Detroit, and Columbus celebrated the team’s win and heard from President Frederick and the basketball coach.

“It’s always great to be with the Howard family. It’s even better when you win,” said Natasha Smith (BA ’04), president of the Columbus alumni club who drove the two hours to Cleveland for the game. Smith said the event was special since she and others haven’t had a chance to experience an event like this since the start of the pandemic.