WASHINGTON – On Sunday, March 3, Bishop Vashti Murphy McKenzie will serve as the chapel speaker. This occasion is also in honor of the 25th Anniversary of the Alternative Spring Break, a yearly event of service around the nation, Caribbean and Ghana by Howard University. Join us at Cramton Auditorium, located at 2455 6th St NW, Washington, DC on Sunday,  March 3 at 11 a.m. for faith, service and justice. 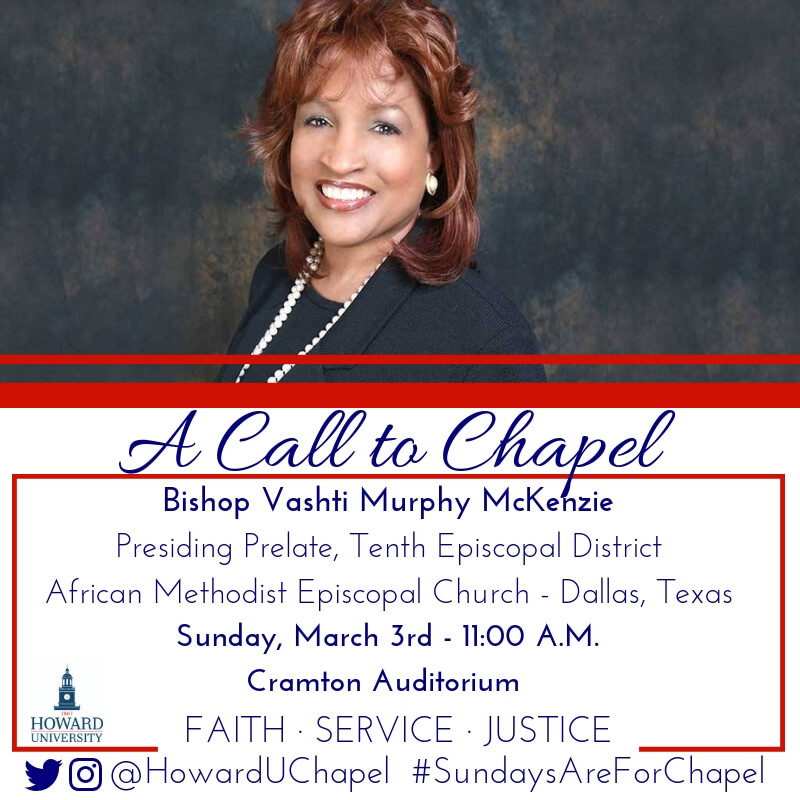 McKenzie serves as the 117th elected and consecrated bishop of the African Methodist Episcopal (AME) Church. Her historic election in the year 2000 represents the first time in the over 200-year history of the AME Church, a woman had obtained the level of Episcopal office. The firsts continue as she served as the first woman President of the Council of Bishops, Chair of the General Conference Commission and was the first woman Host Bishop for the 49th Session of the General Conference of the AME Church in June 2012, with more than 30,000 in attendance. Her husband, Dr. Stanley McKenzie serves with her as Episcopal Supervisor.

Currently, she is honored to serve as the presiding prelate of the 10th Episcopal District, where she provides leadership to all of the AME Churches in the entire state of Texas. She exercises ministry and administrative responsibilities for over 200 churches. This includes Paul Quinn College, a 140-year-old liberal arts historically black college where she serves as the vice-chairwoman. In the past four years, $8.5millions dollars have been contributed from philanthropic donors to undergird the Work College Program, We Over Me Farm and a new dormitory. She is also the founder and chair of 10th Future Inc., a 501c3 non-profit that gives scholarships to students and grants for local church and community service projects. The 10th Future Inc. Annual Golf Tournament has raised over $200,000 for special projects in Texas.

Bishop McKenzie was appointed by President Barack Obama to serve on the inaugural President’s Advisory Council of the White House Faith-Based and Neighborhood Partnerships. She recently was invited to preach at the annual White House Easter Prayer Breakfast at the invitation of President Obama.