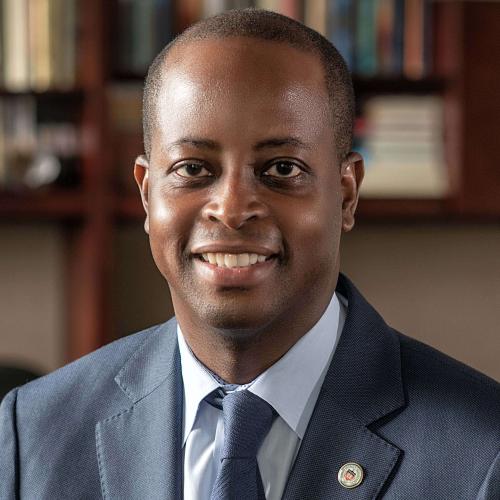 Wayne A. I. Frederick, M.D., MBA, FACS was appointed the seventeenth president of Howard University in 2014. He previously served as provost and chief academic officer.  Most recently, the Howard University Board of Trustees selected Dr. Frederick to serve as the distinguished Charles R. Drew Professor of Surgery. Dr. Frederick has advanced Howard University's commitment to student opportunity, academic innovation, public service, and fiscal stability. He has overseen a series of reform efforts, including the expansion of academic offerings, establishing innovative programs to support student success and the modernization of university facilities. Dr. Frederick received his B.S and M.D. from Howard University.  Following his post-doctoral research and surgical oncology fellowships at the University of Texas MD Anderson Cancer Center, Dr. Frederick began his academic career as associate director of the cancer center at the University of Connecticut. Upon his return to Howard University, his academic positions included associate dean in the College of Medicine, division chief in the Department of Surgery, director of the Cancer Center and deputy provost for Health Sciences. He also earned a Master of Business Administration from Howard University’s School of Business in 2011. Dr. Frederick is the author of numerous peer-reviewed articles, book chapters, abstracts, and editorials and is a widely recognized expert on disparities in healthcare and medical education. His medical research focuses on narrowing racial, ethnic and gender disparities in cancer-care outcomes, especially pertaining to gastrointestinal cancers. Dr. Frederick was honored with the Distinguished Alumnus Award from the University of Texas MD Anderson Cancer Center. He currently serves on the Board of Directors for the Federal Reserve Bank of Richmond, the U.S. Chamber of Commerce and Humana Inc. He is a member of surgical and medical associations including the American Surgical Association and the American College of Surgeons. In 2017, he was named “Washingtonian of the Year” by Washingtonian magazine and in 2015 was named “Male President of the Year” by HBCU Digest.