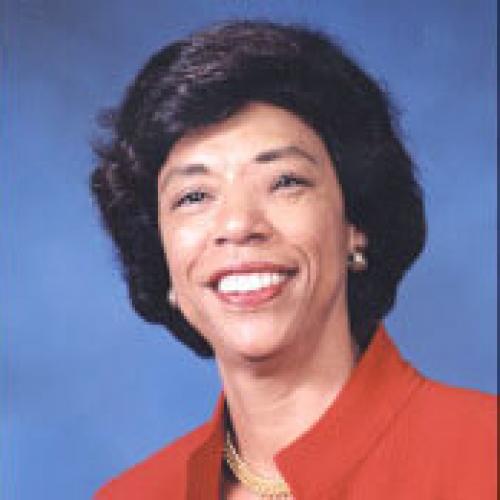 The Honorable Gabrielle K. McDonald served as an Alumni Trustee from 1983 to 1986 and as a General Trustee from 1987 to 2008. She is a Judge in the Iran-United States Claims Tribunal, The Hague, Netherlands. She also serves as Special Counsel on Human Rights to the Chairman of the Board of Directors for Freeport-McMoRan Copper and Gold, Inc., where she is a member of the Board and sits on the Advisory Board of McMoRan Exploration Co.An alumna of the Howard University School of Law, graduating first in her class, Judge McDonald is one of the original judges elected by the General Assembly of the United Nations in 1993 to serve in the International Criminal Tribunal for the former Yugoslavia. She presided over the first trial and was elected President of the Tribunal in 1997.A member of the New York Bar and Texas Bar, her numerous honors include: the 2004 Horatio Alger Award; the National Bar Association's first Equal Justice and the Ronald Brown International Law Awards; the American Society of International Law Goler Teal Butcher Award for Human Rights; and the 2001 Human Rights Award from the Minnesota Advocates for Human Rights. In April 2008, she received the Dorothy I. Height Lifetime Achievement Award from the Intercultural Cancer Council. She has also been inducted into the Texas Women's Hall of Fame, and has received an honorary Doctor of Laws from Georgetown University Law Center, University of Notre Dame, Stetson College of Law, Amherst College, the Jewish Theological Seminary, University of Hartford and Howard University.Judge McDonald serves on the Executive Board of the American Bar Association Center for Human Rights, and on the Board of Directors of the American Arbitration Association. She is a member of the International Jury of the Felix Houphouet-Boigny Peace Prize.