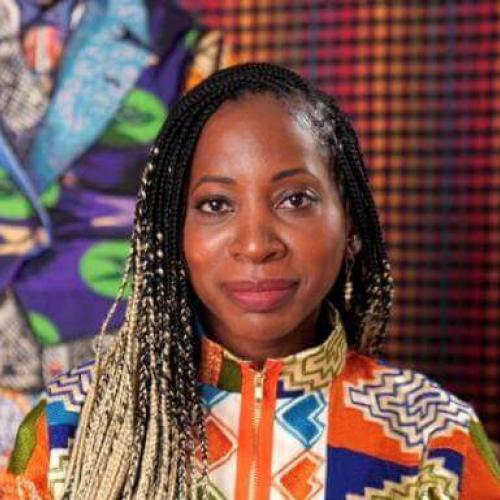 All of my pieces are done in life scale to invite the viewer to engage in a dialogue—most figures look the viewers directly in their eyes. I am inviting a reimagining and a contemporary dialogue about age old issues, still problematic in our culture, through the comforting, embracing medium of the quilt. I am expressing what I believe is the equal value of all humans.

Bisa Butler is a textile artist who creates vivid quilted portraits of African-American life. Born in 1973, Butler initially went into the arts as a painter, earning her BFA at Howard University and her MA in arts education at Montclair State University, where she took a fiber arts class. At Howard, Butler mentored members of the African Commune of Bad Relevant Artists (AfriCOBRA), which sought to define an art aesthetic that represents African Americans in a positive light.  Butler taught art at public high schools for 13 years, quilting in her free time, until she found representation with Claire Oliver Gallery in Harlem and became an artist full-time. In her work, which is deeply rooted in the tradition of African-American quilting, Butler uses Ghanian fabrics, Nigerian batiks, and South African fabrics to capture her subjects’ African ancestry and their place in American history. She has exhibited her work in group and solo shows around the United States and the world.