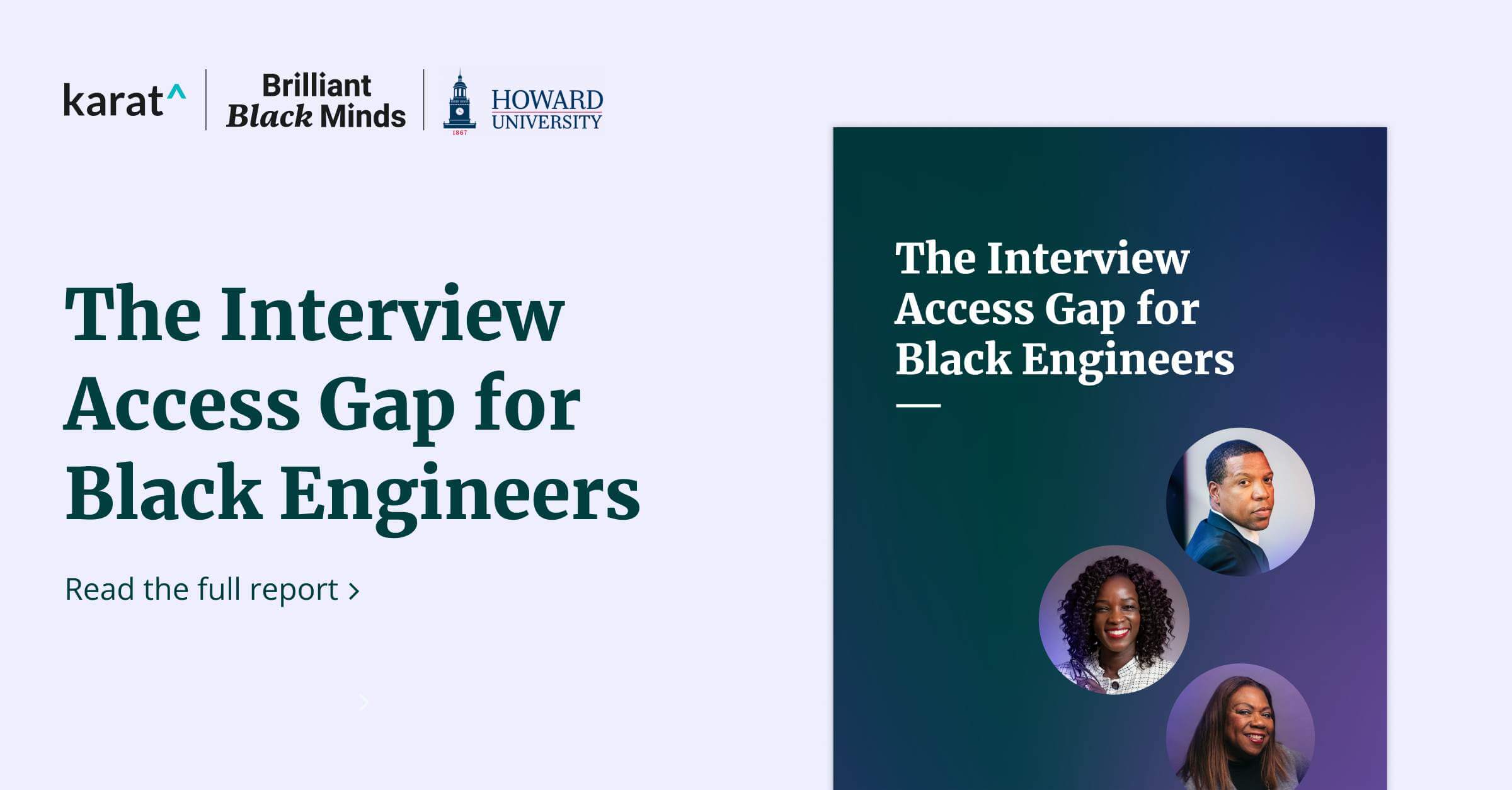 WASHINGTON -  Researchers from Howard University and Karat, the world’s leader in technical interviewing, today released new research exploring key factors that can help more Black software engineers enter the tech industry and excel in their careers. According to the U.S. Bureau of Labor Statistics, Black engineers comprised just 6 percent of all computer programmers in the U.S. in 2020, and this research shines a light on the challenges and opportunities that exist to improve representation.

The Interview Access Gap for Black Engineers identifies a number of socioeconomic and systemic barriers young Black talent face to get jobs in tech. The research study was co-authored by Dr. Legand Burge, III, professor of computer science at Howard University, Dr. Katherine Picho-Kiroga, assistant professor of educational psychology at Howard University, and Portia Kibble Smith, head of diversity and inclusion at Karat.

“This research highlights the importance of transparency and making information about interviews readily available for candidates,” Burge said. “The students in my classes are incredibly resourceful, they’ve had to hustle their entire lives. These are positive traits that hiring managers look for, but they’re hard to demonstrate in a traditional job interview.”

“The lack of representation of Black engineers in tech is a barrier to entry for the next generation,” said Kibble Smith. “A lot of the HBCU students we interviewed are first-generation college students. They don’t have a clear understanding of what goes on in a technical interview until they’re interviewing for their first engineering internship, and they don’t have anyone in their networks to help them prepare.”

Access to people working in the tech sector increase interview confidence, but just six percent of software engineers are Black.

Interview practice helps students overcome the lack of structural exposure and access to the technology industry.

Adding transparency to the hiring process and building methods for underrepresented software engineering candidates to practice technical interviews are two ways that tech companies can close the access gap and reduce interview anxiety. Strategies for accomplishing this include publishing sample interview questions online and giving candidates multiple opportunities to interview. Both of these practices help demystify technical hiring for engineers from nontraditional backgrounds. This not only creates a more equitable talent pipeline but also a more efficient and effective way to hire the best engineers.

“The program has helped participants build confidence, hone their technical interviewing skills and ultimately get summer internships and full-time jobs,” added Kibble Smith. “Interview scores from the Fall and Spring practice seasons showed promising results, with more than three-quarters of students maintaining or improving their performance.”

The full report includes survey responses and feedback from focus groups conducted in the Spring of 2021. More than 300 Black computer science students and alumni from other universities, including Howard University, Morehouse College, and University of North Carolina - Charlotte participated.

For more information about the research study, contact lburge@howard.edu

Karat unlocks opportunity by conducting predictive, fair, and enjoyable interviews for the world's largest and fastest-growing companies. Karat’s human+tech approach uses the world’s first interviewing cloud to enable a global network of Interview Engineers. The expertise and data generated from hundreds of thousands of interviews produce a trusted hiring signal that unlocks developer productivity, accelerates hiring, drives transparency, and promotes equity. Karat is building innovative products and services like the Brilliant Black Minds program with an eye towards becoming the developer talent platform and accelerating the journey from how developers find jobs to how they grow in their careers.