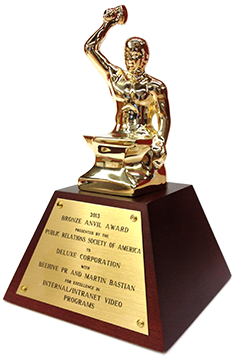 WASHINGTON – The Howard University Office of University Communications (OUC) is the proud recipient of the 2021 Bronze Anvil for Executive Communications presented by the Public Relations Society of America (PRSA) for the campaign titled, “Howard University Positions President as a National Thought Leader.” The annual awards program recognizes and honors the very best public relations tactics. This year’s competition drew a total of 358 entries. Of those, only 33 organizations were selected as Bronze Anvil winners, thus demonstrating the high standards applied by the judges in their evaluation process.

“It is an incredible honor to be recognized by the Public Relations Society of America for our executive communications campaign for President Frederick,” said Vice President and Chief Communications Officer Frank Tramble. “Last year, there was a need for reassuring leadership to discuss the issues permeating the media and our day-to-day lives. We knew that Dr. Frederick’s expertise could fill that void while advancing our key messages.”

In 2019, Howard University launched a new strategic plan, Howard Forward 2019-2024, to execute the University’s improvement efforts. To amplify the plan’s work in 2020, OUC developed an executive communications campaign to position President Wayne A. I. Frederick as a national thought leader and generate opportunities to tell Howard’s story among various stakeholders. The onset of the coronavirus pandemic in March 2020 created a unique opportunity to further leverage Dr. Frederick’s medical background to speak on several topics in his wheelhouse: health, higher education, race and social justice.

“President Frederick is dedicated to improving the higher education opportunities and health outcomes of diverse and low-income populations. The combination of the pandemic, the adverse impact on minority communities and Howard’s involvement to provide relief in the form of free COVID-19 testing centers and vaccine clinics allowed us to highlight Howard’s efforts on a national level and utilize Dr. Frederick as a trusted voice for media interviews and speaking engagements,” said Director of Public Relations Alonda Thomas.

The campaign was further elevated through the political campaign and ultimate election of Howard alumna, Kamala Harris, as the first Black individual, first female and first person of Asian descent to become vice president of the United States. OUC coordinated opportunities for Dr. Frederick to speak on Howard’s legacy of training leaders and the institution’s position among the higher ed elite.

Howard University is one of a handful of universities and the only HBCU to win a 2021 PRSA Bronze Anvil Award next to major corporate PR powerhouses like Amazon, 3M, JBL, and more. This is the second Bronze Anvil win for the department. In 2020, the team won in the twitter engagement category for the campaign “Howard University Homecoming 2019: Howard Forward.”

For more than 45 years, PRSA’s Bronze Anvil Awards have recognized the best of the best in public relations tactics — the use of social media, video, blogs, podcasts, annual reports, digital newsletters, websites — that contribute to the success of overall programs or campaigns. Judging is performed across the United States by teams of PRSA members and others with expertise in the specific categories.