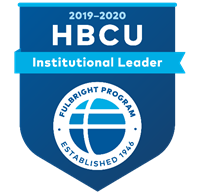 WASHINGTON — Howard University is proud to be named a Fulbright Historically Black College and University (HBCU) Institutional Leader.  For the second consecutive year, the U.S. Department of State’s Bureau of Educational and Cultural Affairs (ECA) is recognizing the noteworthy engagement that selected HBCUs have achieved with the Fulbright Program, the U.S. government's flagship international educational exchange program. Howard University is one of 20 HBCUs to receive this distinction.

“Howard University is delighted to be recognized as an HBCU Institutional Leader by the Fulbright Program. The Fulbright experience has made a significant positive impact on our Howard scholars, helping them to become better global leaders who are prepared to be servant leaders with an international perspective,” said President Wayne A. I. Frederick, M.D., MBA.

Fulbright HBCU Institutional Leader status has been conferred on this group of 20 HBCUs, including Howard University, because they have demonstrated noteworthy support for Fulbright exchange participants during the 2019-2020 academic year and have promoted Fulbright program opportunities on campus.

Since 1950, Howard University has had more than 200 Fulbright awardees, including 100 faculty scholars, 70 student awardees and 40 visiting scholars.

ECA established the HBCU Institutional Leader designation in 2019 to recognize the strong partnerships between the Fulbright Program and HBCUs, and to encourage the entire network of HBCUs to increase its engagement with Fulbright.  This initiative is part of the U.S. Department of State’s long-standing commitment to build diversity and inclusion within the Fulbright Program and within all of the Bureau’s international exchange programs.

Acting Assistant Secretary of State for Educational and Cultural Affairs Matthew Lussenhop praised the designated institutions, stating, “Congratulations to this year’s 20 Fulbright Historically Black College and University Institutional Leaders. We salute you and your institutions for your engagement with the Fulbright Program, and for your commitment to providing life-changing opportunities to students, faculty, and administrators. HBCU participation is critical to fully representing the diversity of the United States through the Fulbright Program.  Fulbrighters from HBCUs carry their identities and school pride with them abroad, allowing people from other countries to learn about these accomplished individuals and about this dynamic group of American institutions and their distinguished legacy. Foreign Fulbrighters hosted by an HBCU return home with new knowledge, an appreciation of the United States, and a broadened perspective on America.”

The Fulbright Exchange Program is the U.S. Government’s premier international academic exchange program.  A hallmark of the Fulbright Program has been its longstanding commitment to diversity, striving to ensure that its participants reflect U.S. society and societies abroad. The Program’s robust diversity strategies and initiatives have included collaboration with a host of diversity-related associations and organizations such as the White House Initiative on HBCUs, the Hispanic Association of Colleges and Universities, the National Clearinghouse on Disability and Exchange, the American Association of Community Colleges, Diversity Abroad, as well as a host of others. The Fulbright Program also works with diversity-focused media and is engaged with hundreds of minority serving institutions and other diverse colleges and universities. The Program is keenly aware that its efforts to increase and enhance diversity must be coupled with inclusion and has taken various measures to help ensure that its diverse grantees have successful and rewarding exchange experiences abroad.

2021 marks the 75th Anniversary of the Fulbright Program. Celebrations throughout the year will highlight the impressive accomplishments and legacy of the program and its alumni over its first 75 years, both in the United States and around the world. A dedicated 75th anniversary website (fulbright75.org) will be updated throughout 2021 to showcase Fulbright alumni, partner countries, and anniversary events.

Fulbright is active in more than 160 countries worldwide and partners with participating governments, host institutions, corporations, and foundations in foreign countries and in the United States. Many of these organizations also provide direct and indirect support. ECA sponsors the Fulbright program, and several non-profit, cooperative partners implement and support the program on the Bureau’s behalf. For further information about the Fulbright Program or the U.S. Department of State, please visit http://eca.state.gov/fulbright or contact the Bureau of Educational and Cultural Affairs Press Office by e-mail ECA-Press@state.gov.