WASHINGTON – “Reporting While Black: The January 6th Attack on Democracy” will offer the unique perspectives of five noted journalists who covered the insurrection on Capitol Hill at the start of 2021. This captivating discussion will be held virtually and in person from 6 p.m. to 7:30 p.m. on Wednesday, January 25, in the School of Social Work auditorium.

The panel discussion, which coincides with the second anniversary of the insurrection, is being sponsored by the Department of Media, Journalism, and Film in the Cathy Hughes School of Communications, the Howard University Association of Black Journalists, and HUNewsService.com.

The session is open to the Howard community and the public. The School of Social Work auditorium is at 601 Howard Place NW, at the corner of Sixth Street. The program will also be live-streamed on YouTube and Facebook.

Here is the stellar lineup:

The moderator is Stacey Patton, Ph.D., an award-winning journalist, author, historian and assistant professor of journalism at Howard. Dr. Patton’s work has been featured in The New York Times, The Washington Post, The Baltimore Sun, Al Jazeera, BBC News, TheRoot.com and The Chronicle of Higher Education, among others. 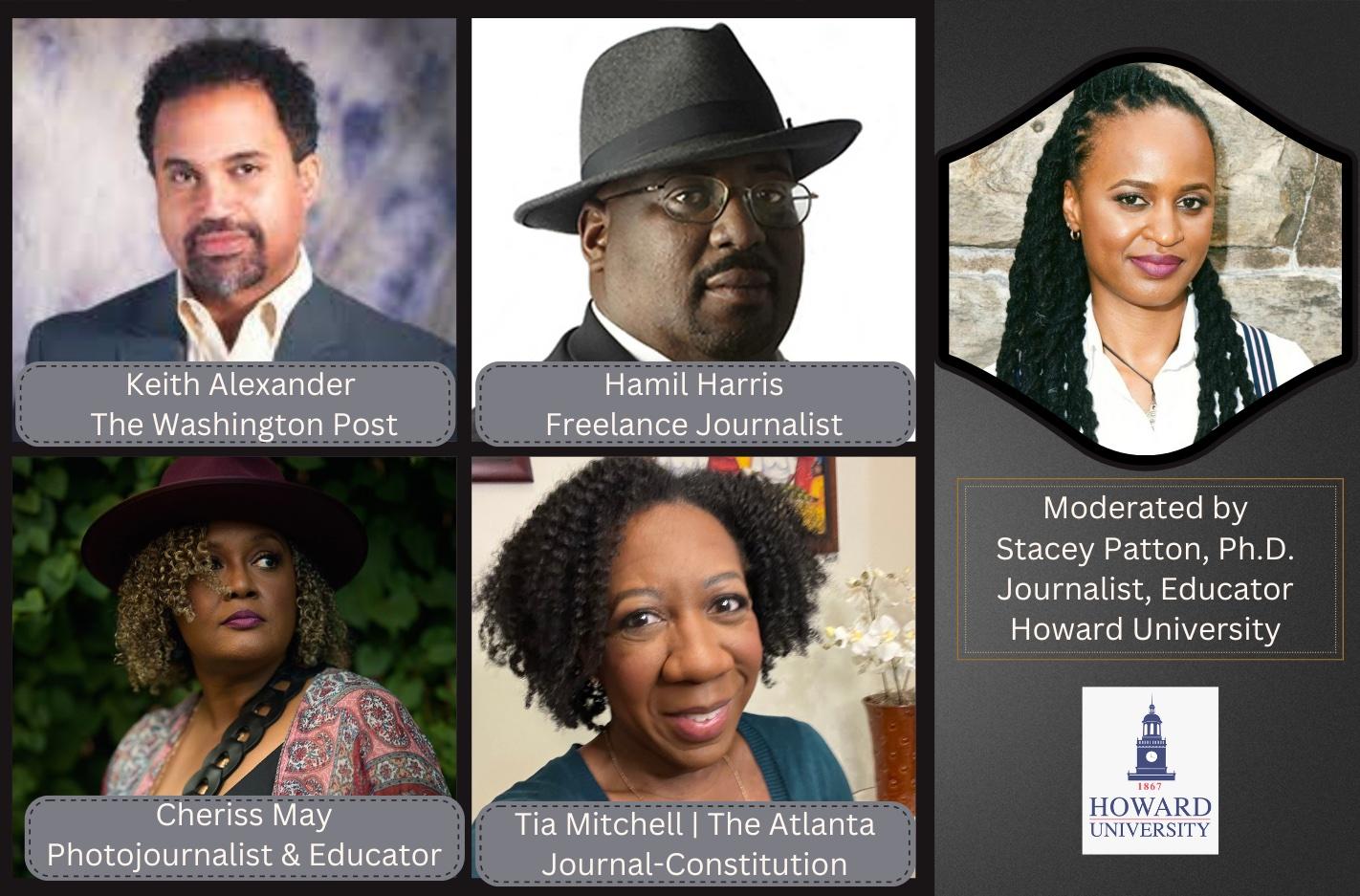 “This panel is important, not just to the community, but to the students who need to hear the stories of the journalists who witnessed and reported on the violent attack at the Capitol, putting their own lives at risk,” said Jennifer Thomas, associate professor and Journalism Sequence cCoordinator.

“Part of our mission for our collegiate journalists at Howard is to expose them to the real-life lessons that come with being defenders of democracy and provide them with tips on reporting on trauma and managing self-care.”

The “"Reporting While Black”" series features Black journalists who cover major stories, such as 9/11. Some sessions highlight special issues that these journalists face on the job because of their race and ethnicity, such as being arrested while covering protests despite displaying their news credentials.

For a half-century, Howard has been the leading producer of journalists such as Alexander and May. The Cathy Hughes School of Communications recently celebrated its 50th anniversary this year.

About the Department of Media, Journalism and Film

The Department of Media, Journalism and Film is the largest unit in the Cathy Hughes School of Communications at Howard University. Its faculty and alumni include award-winning, internationally renowned filmmakers, journalists, media producers, documentarians and research scholars. The department offers one of the top MFA programs in film and the only one at an HBCU. It was named as having one of the best university cinematography programs. USA Today and College Factual have ranked the journalism program among the top 20 nationally, and the National Association of Black Journalists ranked the program as No. 1 in the United States. The Broadcast Education Association honored WHBC student radio with the Signature Station Award. Howard is one of two universities in Washington and among seven HBCUs accredited by the Accrediting Council on Education in Journalism and Mass Communications.

Founded in 1867, Howard University is a private, research university that is comprised of 14 schools and colleges. Students pursue more than 140 programs of study leading to undergraduate, graduate and professional degrees. The University operates with a commitment to Excellence in Truth and Service and has produced two Schwarzman Scholars, four Marshall Scholars, four Rhodes Scholars, 12 Truman Scholars, 25 Pickering Fellows and more than 165 Fulbright recipients. Howard also produces more on-campus African American PhD. recipients than any other university in the United States. For more information on Howard University, visit www.howard.edu.